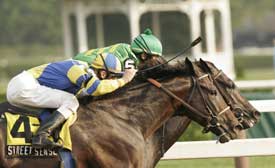 Saratoga Springs, NY - Thoroughbred horse racing jockey, Edgar Prado and horse trainer Carl Nafzger are among the six 2008 inductees into the National Museum of Racing Hall of Fame in Saratoga.

Among his many graded stakes wins, Prado won 2 Belmont Stakes as well as the renowned Kentucky Derby in 2006 aboard Barbaro.

Street Sense at the 2007 Kentucky Derby Trainer Carl Nafzger, a two-time Kentucky Derby winner was also inducted into this year's Racing Hall of Fame. Nafzger won the Derby in 1990 with Unbridled and in 2007 with Street Sense, the only thoroughbred to win both the Kentucky Derby and the Breeder's Cup Juvenile.

The Class of 2008 will be inducted on August 4th at the National Museum of Racing Hall of Fame in Saratoga Springs, New York - located on Union Avenue, across from the Saratoga Race Course.