A popular new iPhone app has local roots! Glenville resident and freelance artist Josh Presseisen came up with the idea and graphics behind the new game RavenSword: The Fallen King, released November 17th as an application download for the iPhone and iPod Touch. Presseisen is the son-in-law of Chip Ellms, owner of Ellms' Christmas Trees in Ballston Spa.

Presseisen's $6.99 fantasy role-playing game was an instant hit, with over 3200 people downloading RavenSword: The Fallen King on the first day of its release. By day two, RavenSword was in the top 40 paid apps and number 16 for top grossing apps. It topped the role play section, beating out its main competitor, Dungeon Hunter, by a fair margin. 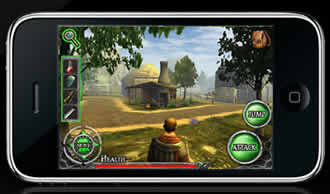 "It was exciting to be a part of this new dimension of gaming, and we were shocked by the amount of success we've seen with RavenSword," said Presseisen. "The sales from the first day were enough to pay off what we put into it, and I'm hoping for at least a month of continued good sales."

Those who have played RavenSword: The Fallen King are often surprised to learn it was created by a two-man game company, Crescent Moons Games. Presseisen worked with a California programmer to create the app, the first official game they have done.

"RavenSword was influenced by Lord of the Rings and Legends of Zelda - just the look of it and the good-triumphs-over-evil aspect," said Presseisen. "I came up with the rough storyline for it about two years ago, and the programmer added some sarcastic humor and other elements to enhance the gameplay."

The attention that Crescent Moon Games dedicated to small details in RavenSword: The Fallen King, such as the graphics, side quests, advancement and being able to switch back and forth between first person and third person at the click of a button, make this game unique from anything else currently available in the iTunes store. Fans of Dungeon Hunter, its closest rival, are finding RavenSword to be even more satisfying.

"RavenSword allows for more freedom than Dungeon Hunter," said Presseisen. "It's an open world, meaning you can go anywhere and talk with anyone, whereas Dungeon Hunter makes you stay on a path and has more limitations."

RavenSword: The Fallen King has seen immediate success, but creation and release of the game were not without challenges. Presseisen said he and his partner had to "get a little creative" to make the game look good as well as work properly on the iPhone's interface. And just five days before the app was set to be released, Apple sent them a rejection notice.

"We had to fix a part of the software," said Presseisen. "It was a little nerve wracking because it usually takes two weeks for them to approve updates, but since there was so much hype around this game's release, Apple approved it in just five days, and we were able to move forward."

Now Presseisen is planning the next sequel to RavenSword: The Fallen King, which will allow players to choose different main characters to complete the story. Crescent Moon Games has a whole team of artists lined up to help expedite the making of the sequel, which Presseisen hopes to release in the spring of 2010. Before then, he wants to offer gamers an interim update, which will allow RavenSword players to win awards and compare their stats on a social networking platform, Crystal.