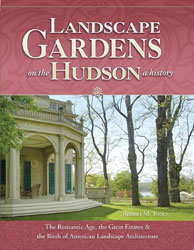 Saratoga Springs, NY -- Most everyone has heard of the Hudson Valley School of painters, but how many people know about the landscapes that they painted? Local Saratoga historian, Robert Toole, has published Landscape Gardens on the Hudson which will hopefully remedy that for many.

What is perhaps so unique and compelling about the landscape gardens on the Hudson is the mind-set with which they were created. Early American ideals played strongly into the idea of the cultivated landscapes of the Hudson -- these men did not want the neat and clean palace gardens of their forefathers. American romanticism was running full force and the new Americans wanted to take advantage of the varied and beautiful landscape of their home -- 'the genius of place' became champion.

The landscape gardens of the Hudson became a more perfect version of the natural; art blending seamlessly with the untamed surroundings. America was 'Nature's Nation,' and keeping the lay of the land was central in American romanticism.