Christmas 2009 at the White House: Saratoga Ornament Hangs on the Big Douglas Fir!
By: Nicole Dallek 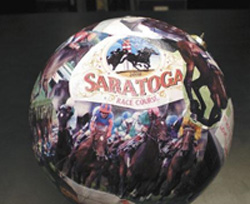 Christmas 2009 will be a first for Michelle Obama in the White House! It is tradition for the first lady to pick a theme that will be displayed on the main Christmas tree in the Blue Room. This year Michelle Obama decided to go with the theme Reflect, Rejoice and Renew.

In efforts to renew and keep green, Mrs. Obama decided to do something a little different this year. The White House took about 800 ornaments left over from previous administrations, and sent them to 60 local community groups throughout the country; she asked them to decorate the ornaments to pay tribute to a favorite local landmark and then send them back to the While House for display.

So how did Saratoga Springs make its way onto the Official White House Christmas tree this year?

It all started with a company Wynn Design and Development in Las Vegas and they were sent 10 ornaments to design and send back to the White House. It was then that Lauren Clauser, an employee of Wynn decided to jump on the opportunity!

Lauren was given the chance to decorate one of these Christmas ornament with any national landmark in the country. Some of her co-workers decorated ornaments featuring the Hoover Dam and The Grand Canyon. But Lauren decided to decorate hers with a place she visited many times as a child- The Saratoga Race Course.

"When I was little, we always would go up to the Saratoga Race Course and visit," she said. When she was first presented with the ornament to decorate, Saratoga Springs "was the first thing that came to mind," Lauren said.

Lauren grew up in North Salem in Westchester Country where she used to go horse back riding. Since then, her parents have retired to Wilton, and when she comes to visit them, she also visits the track when it is in season.

The ornament hangs on the 18 ½ foot Douglas Fir in the Blue Room at the White House along with LED lights, recycled ornaments and other decorations made of natural materials. The White House expects more than 500,000 visitors at 28 holiday parties and open houses!