The 2010 Saratoga Showcase of Homes 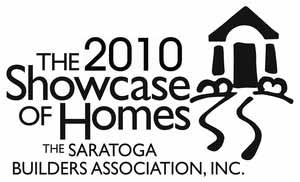 Saratoga Springs, NY - The people have spoken! The Saratoga Builders Association announced the final builder award for the 2010 Showcase of Homes on Tuesday, October 19, 2010. This year's award was presented to Dave DePaulo of Bella Home Builders.

The prestigious "People's Choice" Award is given to the builder that receives the most votes from the general public. Those touring the homes over the three Showcase weekends cast their vote for the favorite builder.

In this year's Showcase, Bella Home Builders was an impressive winner, sweeping the Luxury Home division ($1 million and up) in all categories for their home at Angelina Estates in Malta. Bella Home Builders also took home the Realtor's Choice Award, which was judged by members of the Capital District Realtors Association during a special preview tour.

View more information on the 2010 Saratoga Showcase of Homes»