Annnnnd they’re off! Racing season is here, and if Opening Day at Saratoga Race Course is any indication of what the rest of Opening Weekend in Saratoga Springs will look like, I’d say heat, crowds and excitement are a sure bet (no pun intended).

Many fans on our Saratoga Springs, NY Facebook page were concerned about the safety of the horses racing in this kind of heat. Some were calling NYRA to cancel if the heat continued, but the races continued without issue and without any heat-related complications, thankfully. They sprayed the horses down with a hose periodically to keep them cool, and from what I could tell, the heat didn’t seem to affect them much. And that’s a good thing because…. 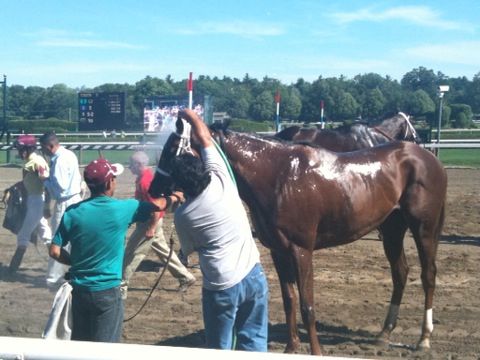 There is more heat in the forecast for Saturday! They say highs around 90 degrees on Saturday… but at least Sunday looks a bit cooler with highs in the lower 80’s. Funny how lower 80’s can be described as ‘cooler’ after the scorching weather we’ve had.

Anyway, there are many more festivities planned for Opening Weekend in Saratoga Springs in addition to the horse racing. As tradition goes, the ever popular Hats Off to Saratoga Festival runs all weekend long, with the Hats Off Music Festival bringing live music to the streets of Saratoga Springs on Friday and Saturday nights and the annual Saratoga Hat Contest at the Saratoga Race Course on Sunday.

In addition to these popular events, some others to check out this weekend would be the 4th Annual Saratoga Blues Celebration (through Saturday), the Saratoga County Fair in Ballston Spa (through Sunday), and Saratoga Polo’s Equicurean Tournament (also through Sunday). Many other great events also going on this weekend in and around Saratoga, so check our Saratoga events calendar, and you won’t want for something to do!

It’s a great weekend to be in Saratoga, and the start of the racing season enlivens the Spa City like nothing else can! Will we see YOU in Saratoga this weekend?