After a long time in the making, the scenic Saratoga & North Creek Railway made its inaugural run last week, as mentioned in an earlier post. The track that connects Saratoga Springs with North Creek is owned by the town of Corinth and Warren County, and hadn’t been used in over 50 years. 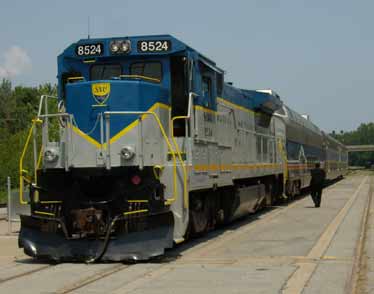 We boarded the train at about 12:30pm after a quick photo opportunity on the platform. The dome car, complete with tables and booths, was built in 1954 and once made regular 39 1/2 hour trips between L.A. and Chicago. I sat next to the window and enjoyed a great lunch and even better views!

The lunch menu for the new railway consists of salads, sandwiches and burgers with plenty of side dishes and beverages available. I enjoyed a hot, philly cheese steak sandwich with potato chips and a soda. Delicious!

After lunch I headed up to the coach cars to check them out. The seats were comfortable, the views were fantastic, and the air conditioning felt great! The track runs along the Hudson River all the way to North Creek and passes a few golf courses, and a stretch of river that is particularly popular to the rafting and tubing community. We must have seen a couple hundred kids in the river, floating on tubes or jumping off rafts trying to keep cool.

This Saturday (7/23), the railway opened to the public and now has the potential to bring a significant economic boost to North Country communities. The ride will be absolutely beautiful in the autumn when the leaves start to change and Ed Ellis, president of Iowa Pacific Holdings LLC, said that he hopes for 50,000 riders by next August. There were also rumors of a Polar Express train in November and December, as well as a ski train to Gore Mountain this winter.

The ride from Saratoga to North Creek took about two hours, and passed several stations at Hadley, 1000 Acres Ranch, Riparius, and Thurman. I had a great time on the railroad, will you be taking a trip through the Adirondacks this season? It’ll be nice to be able to take the train up to ski in the winter, then relax on the way home with a hot beverage or even a nap!