When we think of taxis, yellow is the color that comes to mind, but Bryan Norswothy is starting a cab company that’s a little more “green”.

Tired of paying so much for gas, the former cab driver was inspired to start a hybrid cab company and a more sustainable option in local transportation. 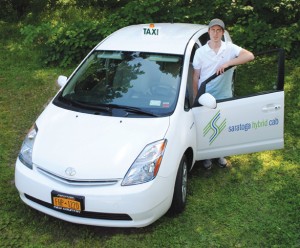 The result was Saratoga Hybrid Cab. Currently, it is a single car company (operating out of a 2008 Toyota Prius).

But Norsworthy has hopes that business will improve and he can hire more cars and drivers.

So far, he says the business venture has been like an experiment, but he has received lots of positive feedback about the idea.

Though Saratoga Hybrid Cab is a pioneer in the county, it’s not the first time someone has thought of reducing the cab-carbon footprint.

Nationwide, there is an abundance of “green” taxi companies with hybrid vehicles carrying environmentally conscious customers.

I expect Norsworthy will do well in Saratoga Springs, considering how many other green-minded automobile dealers, organic food vendors, and other environmentally-friendly businesses are successful here.

What do you think of Saratoga Hybrid Cab’s idea? Will you call a “green” cab the next time you’re out? Tell us your thoughts!