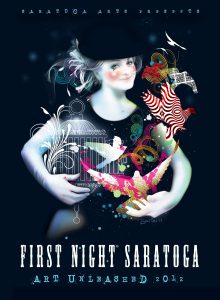 Have you seen the new poster for Saratoga Springs First Night, 2012? A true work of art, It’s absolutely amazing, and begs for a suitable frame that will display it’s splendor!

First Night Saratoga 2012 is a New Year’s Celebration of the Arts and Community, and is presented by Saratoga Arts Council, 320 Broadway, Saratoga Springs. A call for artists’ entries is currently underway. A fundraiser and holiday party benefiting First Night will be held at Longfellows in Saratoga on December 7 and is a fabulous way to start off the holiday season! I can’t think of a better and more entertaining way to ring in the New Year!

Get the details on Saratoga First Night 2012 »