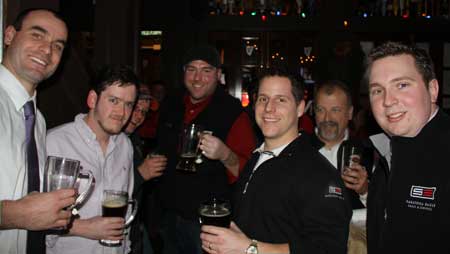 The inaugural Saratoga Beer Week, presented by Saratoga.com, is just 2 months away — February 23-25, 2012 — and now you can purchase tickets!

2012 is the first year our great city of Saratoga Springs will be hosting a Beer Week (even though it’s not starting out as a full “week” just yet), and the organizers held a ribbon cutting for the event at the Saratoga City Tavern on Dec 22.

The ribbon cutting doubled as a kick off party for Beer Week ticket sales and excitement surrounding the first ever Saratoga Beer Week!

There was a great turnout for the ribbon cutting event, as many in the Spa City have been excited that Saratoga Beer Week is on tap since it was first announced back in early August.

All the sponsors were there to cut the ribbon and enjoy great beer, great company and live music at this pre- Beer Week celebration. Those represented include Saratoga Convention and Tourism Bureau, presenting sponsor Saratoga.com, representatives from the Saratoga County Chamber of Commerce, as well as friends and family of Garth Ellms and AJ Bodden (the masterminds behind Saratoga Festivals, including Oktobeerfest and Saratoga Brewfest). 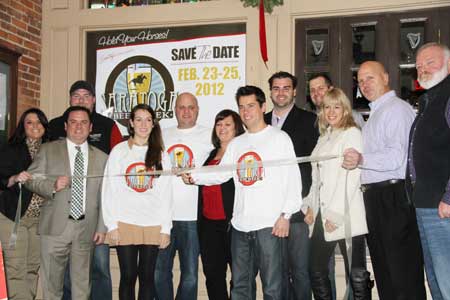 The organizers of Saratoga Beer Week want the 3-day beer festival to be really great and really popular with two major goals in mind. First and foremost, they want to showcase the great beer and venues Saratoga has to offer, including the educational aspects of beer making, beer pairing and more. And secondly, they want to drum up excitement for Saratoga during the off-season, draw people here and boost the local economy in doing so.

Can you think of anything better to get people excited than beer? I can’t! Cheers to Saratoga Beer Week!