Vinny Guadagino of the popular MTV show Jersey Shore is making his way to Vapor Night Club in Saratoga Springs. All you shore fans, better GTL (gym, tan laundry) to prepare for the big night! 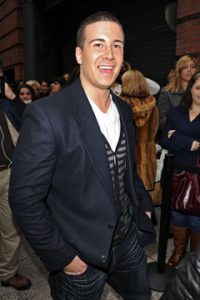 Saturday, February 18, Guadagnino will be hanging out with fans at Vapor Night Club. Tickets are $15 in advance and $20 at the door.

Who is Vinny Guadagnino you ask? Guadagnino comes from a traditional Italian-American family in Staten Island. He graduated from SUNY New Paltz with a degree in political science. After graduating college, Guadagnino had plans attend law school, but on a whim he applied to be a cast member of the Jersey Shore and ended up becoming a reality TV star.

What has Guadagnino been up to these days? He recently guest-starred on the MTV comedy series The Hard Times of RJ Berger, playing the role of RJ’s cousin and has also been featured on the show 90210.

So, if you’re in a fist pumping kind of mood and looking to have some fun this Saturday night, join DVDJ Dred and host J.Will as they welcome Vinny Guadagnino to Vapor Night Club in Saratoga Springs.  Doors open at 9 PM and guests must be 21 and older to enter.