Famed singer-songwriter Don McLean will perform this June at the SaratogaArtsFest in the Arthur Zankel Music Center at Skidmore College.

If you’re craving a little folk music, make sure you check out McLean at the SaratogaArtsFest! If you’re not familiar with the festival,  it’s a four-day celebration of the arts in and around Saratoga Springs.  The festival includes dance, film, literary art, theater and visual arts. 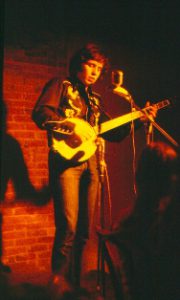 McLean will be performing at 8 p.m. June 8 in the Arthur Zankel Music Center at Skidmore College. Tickets will go on sale March 20.  Admission is $50 or only $10 if you have a SaratogaArtsFest ART PASS.  The ARTSPASS admission package is available until March 31 for $30.

Did you know that Saratoga Springs was McLean’s old stomping grounds? And forty years after his famous song “American Pie,” climbed the top of the charts, McLean will return to Saratoga Springs, where he first started perfecting his talent at Cafe Lena. The picture to the left is of McLean strumming his guitar at Cafe Lena. McLean was a very close friend of Lena and said that she used to help him out when he didn’t have a lot of money.

So, if you’re on a tight budget like McLean was back in the day, the SaratogaArtsFest is the perfect opportunity for music lovers to enjoy McLean’s music in an intimate setting and at a reasonable price.

See more information on the 2012 SaratogaArtsFest >