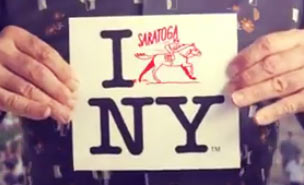 Did you see the new I Love NY video that was just released? It is a clever little clip that shows the heart in I Love NY being replaced by different objects, from a lighthouse to a bicycle to a Saratoga race horse — these are all of the things to love about NY!

Saratoga was one of only two destinations specifically featured by name in the short, 30-second video clip. Can you guess what the other destination might be? Nope, not NYC!

Kudos to the Saratoga County Chamber of Commerce who apparently had some influence in getting Saratoga featured. According to their recent newsletter, “Twice last year, Chamber President Todd Shimkus met with Ed Maitino, State Director of Tourism and the I Love NY program, to talk about highlighting Saratoga as a key destination in future I Love NY campaigns…With funding from Empire State Development in 2012, I Love NY has just created two new TV spots under the title “Follow Your Heart.” And, we’re pleased to report that one of these ads features Saratoga!”

We’re pleased to report this as well. After all, is there any New York destination quite like Saratoga? We were spotlighted in the video for the Saratoga Race Track, but Saratoga has so much more to offer!

Tell us what you think of the video and Saratoga’s featured spot in the comments below!