For track aficionados, it’s an exciting day when NYRA announces the Saratoga Racetrack giveaways. Everyone looks forward to learning what Saratoga swag they can collect each year. But last week when the 2012 giveaways were announced, eyes eagerly scanning the list realized one thing… there is no t-shirt giveaway! 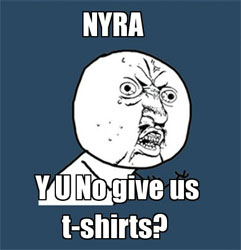 The Saratoga Picnic Mat giveaway is new this year. It’s a great collector item to use while picnicking on the grounds of the track, or at any other Saratoga park. It’s a cute idea we might be really excited about, if we weren’t so distracted by not having a t-shirt…

Not giving away a t-shirt seems strange. People love those shirts and wear them everywhere! How can you show your Saratoga pride all year round if you don’t have a t-shirt?

Plus, the shirts are practically collector items! Everyone knows that guy who has every racetrack t-shirt from the past ten years. So where’s the 2012 one??

What do you think about there not being a t-shirt giveaway this year? Where are you planning on getting your Saratoga swag instead?

More information on the Saratoga Racetrack