Patrons at the Saratoga Racetrack have long enjoyed the convenience of Hattie’s booth at the track. With delicious food in one hand and betting slips in the other, Hattie’s at the Track is something enjoyed by all. Fried chicken fans were appalled however, when it was recently announced that Hattie’s spot at the track may be moving to a tiny booth in an out of the way location.

Yes! Unfortunately it appears that NYRA and Centerplate want to move Hattie’s booth at the track to a far off location that can only be found by those who already know where it is. 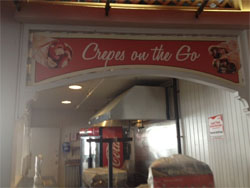 Hattie’s facebook page notes that the place is “too small, out of the way and an all around mess.” Tucked in an old “Crepes to Go” booth in the Carousel of the track, it appears that Hattie’s judgement is spot on.

“Historically nothing has survived there,” says Beth Alexander of Hattie’s. “We love being at the track, but we can’t expect our customers to hop all over the track to find us.”

Fans have reacted with disbelief bordering on outrage, and Hattie’s ominously hints that this new location may be the end of Hattie’s at the Track.

“I have always felt that we were penalized for doing well there and weren’t wanted,” continues Alexander. “We have a few more calls to make and hopefully we can appeal to the powers that be, but it doesn’t look good.”

What do you think about this new location? Where will you go for food at the track?

Other places to eat at the Saratoga Race Course