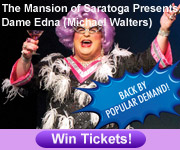 Michael Waters as Dame Edna was a huge hit last year, and earned rave reviews from 2011’s sold out crowd! The show is at the Mansion Inn in Saratoga at 8pm on August 1st and 8th. Full bar & bistro menu is available from 6pm on both nights.

This event will sell out, but we’ve got a pair of tickets to give away here on Saratoga.com.
You can enter every day to increase your chances of winning!