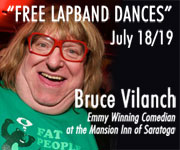 Six time Emmy Award winning comedy writer Bruce Vilanch will be performing at The Mansion Inn of Saratoga next week. The Hollywood Squares star has been writing for the Oscars for over 20 years, and now writes for the Tonys, Grammys and Emmys as well.

The show will take you behind the scenes of various show business events, sharing stories of your favorite stars from a different perspective.
We’re giving away a pair of tickets ($50 value) here at Saratoga.com. Enter the giveaway here, and you could be on your way to this hilarious show for FREE.
(Come back and enter the giveaway everyday for better chances of winning!)