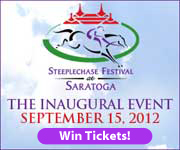 Have you ever been out on the infield at Saratoga Race Track? You’ll get that chance at the inaugural Steeplechase Festival at the Track on September 15th!

PLEASE NOTE: The Inaugural Steeplechase Festival at Saratoga has been postponed until further notice. Please watch our blog for details as they develop.

The New York Racing Association (NYRA) and the National Steeplechase Association (NSA) will team up to bring you this major event. The festival will have at least five races, four of which will feature hurdles.

Oh, and you’ll be able to set foot on the infield at the Track for the first time in about 30 years!

There will be corporate tents as well a spectators tent at the final jump on the infield. The spectators tent will hold 150 patrons and will include a catered lunch! The following organizations have reserved corporate tents on the infield: Capital OTB, Fasig-Tipton, Gideon Putnam Resort, New York Thoroughbred Breeders, New York Thoroughbred Breeding & Development Fund, Sackatoga Stables, Saratoga Convention & Tourism, and the Saratoga County Chamber.

Do you want to go to this awesome event at the Saratoga Race Track? We’re giving away a grand prize consisting of TWO Steeplechase Festival Tickets with VIP Parking! In addition to that great prize, we’re giving away 10 General Admission tickets as well! Want a shot at one of the prizes? Enter here!
Remember, you can enter to win every day, so bookmark the page so you can come back and increase your chances!
Enter Here To Win FREE Steeplechase Festival Tickets >>