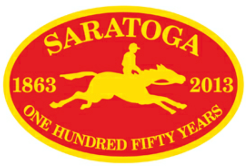 Five lucky horse racing fans will have a fantasy come true at the Saratoga Race Course during the 2013 season.

Five fans will be selected to place a $15,000 wager on a designated stakes race, with someone else’s money.

If the fan selects a winner, he or she will get to take home the full on-track winnings, not having spent a penny of their own money.
On August 3, 2013, the date of the first race at Saratoga 150 years ago, Sesquicentennial Honorary Chairs Marylou Whitney and John Hendrickson will present the first prize winner and  their selection. The winner will place a $15,000 win wager on, in the $750,000 Whitney Handicap for three-year-olds and up.

Marylou Whitney and John Hendrickson thought of this created this contest and will be providing the money for the lucky fans to wager.

The $15,000 wager-choice promotion will be offered each Saturday, thereafter, throughout the remainder of the Saratoga racing meeting that runs through Labor Day. The other designated races are:

Drawings for the five $15,000 wagers will be held weekly, in a random, electronic-based system. Winners will be notified by phone and e-mail, and on the Friday that is eight days prior to their wager choice, the winner will be announced at the track. He or she must be present at Saratoga Race Course on the day of their designated race to direct the wager.

Only one entry, per person, is allowed, and must be 21 years of age.

The winner, and a guest, will receive VIP Clubhouse amenities including admission, luncheon and programs from the New York Racing Association that operates Saratoga, Belmont and Aqueduct Thoroughbred tracks.

Will you be entering to win a chance at placing a $15,000 wage with someone else’s money?