Business is brewing so well at Druthers Brewing Co., located on Broadway in SaratogaSprings NY, that the owners are planning on enclosing the open parcel between the brewpub and the adjacent Perry building to make way for more bar!

While a small portion of the outdoor patio area will be lost in the expansion, it is a small price to pay for the second bar they are building to accommodate their large crowds. 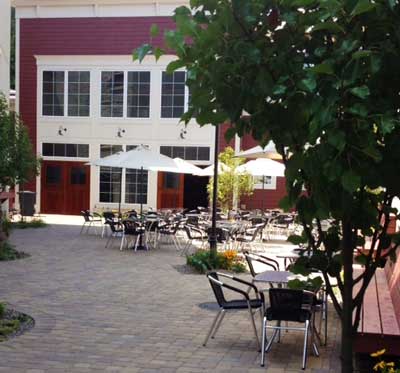 The new foundation will have to be built off-site as the brewpub’s location on the main drag in Saratoga NY, make it inaccessible to heavy equipment. Druthers Brewing Co. wants to assure their customers that they will remain open during the construction!

A large beer garden, diverse menu, acoustic entertainment, and handcrafted and freshly brewed beers seem to have been the perfect recipe for Druthers, which opened in the summer of 2012 and because of their success, already need to expand. It seems like just yesterday that we were announcing Druthers Brewing
Co.’s opening in Saratoga. Prior to opening, they drew quite a buzz, and after opening, Druthers was popular from Day 1 with crowds
so large they actually ran out of beer on their opening weekend. It’s no
wonder they now need an expansion!

You can watch master brewer, George de Piro, in action at Druthers, which makes their own beer on site and also grows the herbs and lettuce used in the restaurant on their roof!

Druthers Brewing Co. has a great American story! Beginning as an idea between brothers, it eventually involved everyone investing all they had (and then some!) with the result being a successful Saratoga Springs brewery with craft beer that keeps customers coming back for more. Learn more about Druthers’ back story in our interview with co-owner Chris Martell >>

Share with us your experiences at Druthers Brewing Co.!