This morning the Saratoga 150 celebration, in honor of the 150th anniversary of the Saratoga Race Course, officially began, and Saratoga.com was lucky enough to be there.

Saratoga 150 Committee Honorary Chairs, Marylou Whitney and John Hendrickson, were joined by Committee Chairman Charles Wait and several NYRA executives at a press release to announce the first 30 inductees for the brand new “Hoofprints Walk of Fame,” which will be featured outside the clubhouse entrance at the Saratoga Race Course.

The new walk of fame will honor the most prolific and notable horses to have raced at one of the nation’s most historic tracks, modeled after the Hollywood Walk of Fame. 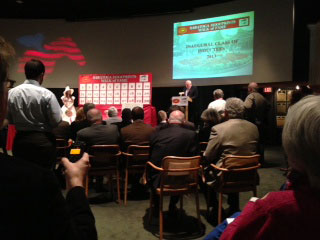 The horses were selected by the Saratoga 150 committee; it was a painstaking process to choose the first 30 race horses for this great honor, but the biggest factor of the selection process was the horse’s specific success at the Saratoga Race Course.

Each thoroughbred will be honored on a granite plaque alongside the names of its sire, dam, owner, trainer, and jockey. The plaques will also feature the horse’s year of birth and signature wins at Saratoga Race Course.

Class of 2013 Race Horses into the Hoofprints Walk of Fame:

A number one could simply not be named! The rank of the race horses inducted was chosen at random during the press conference.

The Saratoga 150 celebration is off to a strong start, but with more than 180 events on the calendar over the next 5 months the best is yet to come.