Members of Saratoga Springs High School’s NASA Club have become local celebrities as one of only two groups in the state of New York to qualify for the Team American Rocketry Challenge National Finals!

725 teams competed nationally for the finals, and Saratoga Springs’s High School NASA Club was one of 100 teams selected to compete in the national rocketry competition on May 11th in The Plains, VA. To qualify for the national competition, the team raised money to design, build and fly a rocket carrying a raw egg to an altitude of 750 feet, and then land it without even cracking the egg! After weeks of practicing, the students completed a successful flight under the observation of a mentor from the National Association of Rocketry. 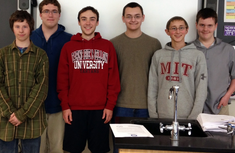 Team America Rocketry Challenge is the world’s largest student rocket contest and winners will receive $60,000 in scholarship money along with a chance to participate in NASA’s Student Launch Initiative!
BUT….in order for the group to travel to the Team America Rocketry Challenge National Finals in Virginia on May 11th, these determined students need your help to raise $3,000 and since the competition is next week…they need to raise the money fast!
Team members are juniors Connor McFarland, Charlie McCabe, Jay Murray, Steve Leonard, Mike Gregory, and freshman Michael Young; with science teacher Charlotte Naples serving as advisor.
Team America Rocketry Challenge is the world’s largest student rocket contest. Let’s support these inspirational and imaginative local kids and help give them the opportunity to represent Saratoga Springs NY at the national level, and teach them – and all kids – that hard work pays off. These students have been working towards this goal for three years!
For more information about the team, or to make a donation supporting the trip to the national competition, contact Charlotte Naples at:  c_naples@saratogaschools.org. Donations can be made by check to:  Saratoga Springs High School, with a note in the “for” space indicating NASA Club – TARC Nationals. Any monetary amount would be appreciated!
Your small contribution will help immensely and any contributions over the $3,000 will stay within Saratoga Springs High School’s NASA Club as the group plans to enter the competition again next year.
Alright….I have sent my $10 check to help send Saratoga Springs NY High School’s NASA Club to the national finals – have you?