At this time in 2015, Saratoga Casino and Raceway will look much different than it does today! 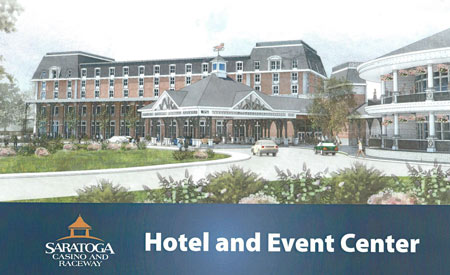 Details Of The Expansion Plan At Saratoga Casino

Saratoga Casino and Raceway celebrates 10 Years in 2014, which is when construction on the planned expansion will begin. The opening of the expansion project is slated for spring 2015. The venue plans on playing host to concerts, comedy shows, banquets, weddings and more once the project is completed.

The Benefits Of This Expansion

Saratoga Casino and Raceway employs over 600 team members and had payroll expenditures over $18 million in 2012. The expansion plans include the creation of 260 additional jobs at the facility, and an additional $9 million in annual payroll expenses, bringing the total number of employees to 900 and yearly payroll expenses to $27 million.

“We look forward to undertaking this plan and are pleased to be able to move forward,” said Jamie Hartman, Executive Vice President and Chief Operating Officer of Saratoga Casino and Raceway. “We are also excited to create more than 300 union construction jobs and $21 million in payroll to the Capital District when jobs are so sorely needed by all upstate communities.”

This announcement comes in the wake of Governor Cuomo’s recent announcement that there would be no casinos in the eight northern counties of Upstate New York. This had many of us wondering if perhaps the Racino is positioning themselves to be a more appealing choice for table gaming. Turns out that is not their overt goal, and if they are chosen for table gaming, they would need to expand their plan (but they did say their plan was “expandable” just in case gaming arrives).

Saratoga Casino and Raceway underwent a $15 million renovation and expansion prior to opening in January 2004. In 2007, $25 million was spent to add 400 slot machines and electronic table games, Vapor Night Club and the Garden Buffet. These new upgrades will be the most significant in the history of the venue.