Saratoga has long been known for its glorification of horses, but another popular part of Saratoga culture is dance. The city plays host to the annual Dance Flurry Festival, along with elaborate galas, the National Museum of Dance and the New York City Ballet summer season.

Anyone who has been to Saratoga in the past ten years is sure to have seen the 23 Saratoga fiberglass horses that have decorated the streets downtown since 2002; so it was about time they did the same to recognize Saratoga’s dance culture!

Well this May, the streets became even more lively because The National Museum of Dance has selected 24 artists for a project called Saratoga En Pointe! Each artist decorated a five-foot tall fiberglass ballet shoe sculpture. These fiberglass ballet shoes are displayed throughout the City of Saratoga at select locations. The creations were unveiled on May 31, 2013. 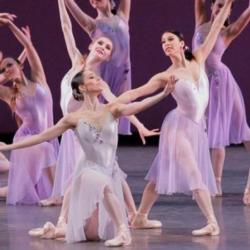 The National Museum of Dance hopes that the shoes will promote the museum and hosted an event to present the fiberglass ballet shoes when they were finished.

An exhibit at the museum named “En Pointe!” will also run through Nov. 24 and explore the history, traditions and realities behind pointe shoes and ballet itself.

The exhibit will also include many different types of pointe shoes, including autographed shoes, as well as video features.

These new additions add a unique touch to the already charming downtown Saratoga Springs. What is your favorite shoe design?

See the locations of the shoes here>>