In last year’s polls, Saratoga Springs was named one of the top 10 small cities by ABC, with the fifth best Fourth of July celebrations. Saratoga is no stranger to these “best” lists, but this is certainly an honor. A unique event that helped the Spa City climb that list was a four mile road race named the Firecracker 4 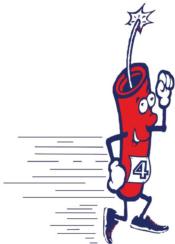 Thousands of people running down Broadway in to the City’s neighborhoods is an awesome way to begin Fourth of July festivities. The raving fans always come out to support the runners in their four mile journey through this historic city. From the thundering start down Broadway, to the inspiring finish under the American Flag, the day is set to be patriotic and a lot of fun!

This annual race will begin at the Saratoga Springs City Center and will take runners south on Broadway to Circular Street then east through the historic residential district and finishes behind the City Center.
Last year 3,300 runners participated, enjoying entertainment while they ran and food, music and activities at the finish line. There will be great bands at the start and finish to begin and conclude the race experience.
You can even get a team together and race in colors; earn some bragging rights! There will be a monetary prize that will be awarded to the top individual and top team as well as 174 award categories for runners of all ages. The Firecracker 4 is a competitive yet fun race, so don’t hesitate to register!
The 2013 Firecracker proceeds will go to the Saratoga Springs High School track/field/cross country programs, the Wilton YMCA Expansion and the Saratoga Greenbelt Initiative.
All of these funds and the Firecracker 4 are committed to helping local athletes, the wellness of the community and infrastructure that makes Saratoga Springs and amazing destination for people with active lifestyles.
Not only will the Firecracker 4 recognize individual and team runners, but also a special recognition of Military and Public Safety (Police/Fire/EMS) competitors. These individuals work hard to protect our communities and this is a special way to acknowledge all of their efforts.
So what do you say? Will you start your 4th of July festivities with a band and run the Firecracker 4? Or spectate? Let us know here!
Learn more about the Firecracker 4 >>