The New York City Ballet and the Board of Directors at Saratoga Performing Arts Center (SPAC) recently announced that the NYC Ballet will return in summer 2014 for a one-week summer engagement. 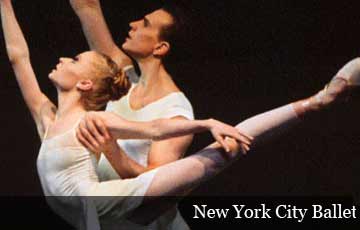 This news is even more exciting because the NYC Ballet has returned to their summer stage at SPAC on July 9, 2013 for this year’s season.

The company is here until July 13th to present another breathtaking season of world-class dance. The performances this week will without a doubt have the audiences anxiously awaiting next year’s season.

Their presence represents a continued partnership with SPAC and it is exciting to hear that their return has already been planned for summer 2014, even if it is only for a week.

Officials from both organizations stress their enthusiasm of preserving NYC Ballet’s historic annual engagement in Saratoga.

One of the world’s foremost dance companies, New York City Ballet, will kick off their 2014 one-week event on July 9, 2014. The dance company will present seven performances over the course of a week which concludes with the Ballet Gala: The Ruby Ball on Saturday July 13, 2014.
The New York City Ballet has spent more than 40 years performing at SPAC and is grateful for their loyal and enthusiastic audiences. They are pleased to come back to SPAC and showcase their diverse repertory of 14 stunning ballets during its Saratoga appearance.
Some of the performances include Balanchine masterpieces Serenade and Theme and Variations as well as a special Gala program featuring the Saratoga premiere of Peter Matrins’ Bal de Couture and Christopher Wheeldon’s pas de deux This Bitter Earth. Also highlighting the 2014 season will be three performances of Justin Peck’s Year of the Rabbit which received wide critical acclaim following its New York Debut in October.
Will you go to a performance? Which date are you most excited about? Tell us here!
See more about NYC Ballet>>
See more about SPAC>>