This is taking karaoke to a whole new level! Have you ever wanted to be in a band, doing gigs at a popular downtown bar in Saratoga? Well this is your chance to live that dream!

Every Monday night all summer long at The Parting Glass, ROCKSTARU gives you the chance to sing karaoke with a live band instead of a track. The locally famous Audiostars with J. Yager will be your live band, and you’re the lead singer!

Starting July 22 and lasting through Labor Day, The Parting Glass in Downtown Saratoga Springs will host ROCKSTARU with the The Audiostars on Monday nights, giving you a chance to sing onstage accompanied by a live band. 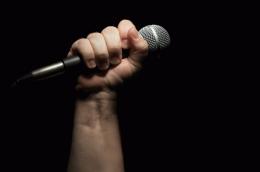 Formed by singer J Yager and guitarist Matt Pirog, The Audiostars have become increasingly popular since they formed just a few years ago. The band is entertaining and unique, and its other members include drummer Chad Poss and bassist Bobbie Van Detta, who has performed nationally with acclaimed musicians such as Bon Jovi, Bob Dylan and Eric Clapton.

ROCKSTARU will run every Monday throughout the Saratoga Race Course season. Karaoke starts at 7 p.m.

Know someone who is a karaoke star? Share this story with them!