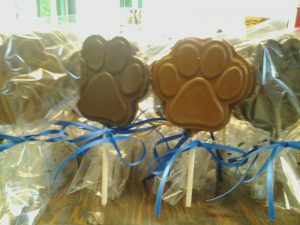 A community staple for 15 years, The Candy Co. of Saratoga is selling a brand new “doggie themed” treats to help a good cause. Introducing the new Sawyer Pops — a paw-print-shaped chocolate lollipop named after the owner’s rescue dog Sawyer. Though chocolate is strictly for human consumption, the sale of these new chocolate paw print pops will help raise funds for a new fence for the dog park in the Saratoga State Park.

“I have rescue dog, Sawyer, who is the love of my life. I don’t feel comfortable letting him off his leash in the park until this fence is built,” says Candy Co. owner Dawn Oesch.

The dog park in Saratoga is perfect for a leisurely walk and play date with your pup, but wouldn’t it be great if you could unleash your dog with the peace of mind and security of a fenced-in park? That’s the thinking behind the Saratoga State Park dog fence project, and when you purchase these new paw print chocolate pops at the Candy Co., you can help the cause!

The chocolate pops are on sale now, so stop in today and pick one up for you and a friend. Would you like to see a fence around the dog park in Saratoga? Share this story to spread the word. 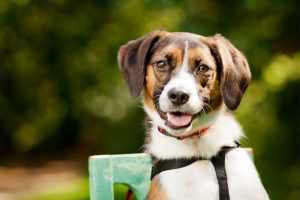