It was obvious the river was overflowing, with visitors that is, as Union Avenue sidewalks disappeared to lines and lines of parked cars, extending all the way up into local neighborhood developments such as Regatta View. The 2013 tally for number of Head of the Fish boats on October 26, 2013, came in at 2099, just above the former largest regatta, the Head of the Charles, which brought in 400,000 spectators but only 2089 boats this year. 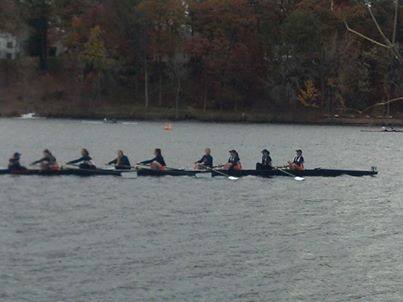 Part of the success was the date (the Saratoga regatta is now held on a Saturday instead of Sunday) and the fall gorgeous weather. Perhaps the date and location are perfect for local colleges and rowing groups.

“I think that these races in the fall have given our younger guys a chance to compete and for us to see where we are heading towards our 2014 season,” said St. Lawrence head rowing coach George Repicky.

On September 26 the Saratoga Rowing Association reported that they had a little over 300 boats expected to take the waters for the two-mile race. Lee’s Campground was the home to spectators, the boat lineup, vendors, EMS and dockmasters all trying to make room for the extra dock space and boats.

Awards for this regatta were in the form of fish heads. The gold, silver and bronze Fish Head trophies were given to the winner of every race that has 5 entries, and could be a coveted item for those extra 100 or so late-night entrants.

The Saratoga Rowing Association was able to organize the unexpectedly large event, although there was a 2-hour delay on Saturday. The winds were high but local Albany Rowing Center took home a victory, and the Saratoga Rowing Association was already celebrating their victory of a successful to-the-brim event. Plans for next year may include some new dock space to accommodate the now-very-popular regatta!