Although it’s 2013 and not 1963, the halls of Skidmore College are abuzz with Beatlemania. Each fall before Thanksgiving, students, faculty, and the Skidmore community gear up for the annual Beatles tribute concert, Beatlemore Skidmania.

We spoke with Professor Gordon Thompson, the man behind the student group that plans the event. We also got a chance to chat with student David Slitzky about his experience as a performer and an organizer of the incredibly popular concert. 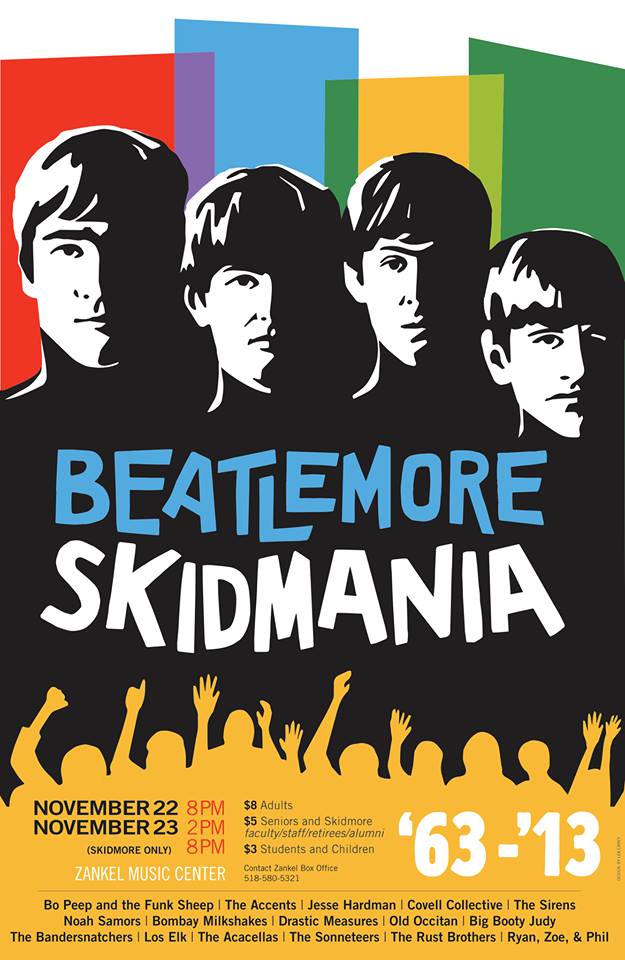 Skidmore College Professor Gordon Thompson has taught a seminar on the Beatles since 1997, a concept he admits “raised a few eyebrows” in the beginning. The seminar is now a cornerstone class at Skidmore. Thompson believes the seminar quickly grew in popularity “because students realized they were doing something special.”

During the seminar, students rigorously compare biographies, analyze dozens of songs, and compile the usual academic essays, presentations, and final projects. In 2001, after the tragedy of the 9/11 terrorist attacks, Thompson’s seminar students wanted to put on a concert of the music they were studying.
Of the first Beatlemore Skidmania concert, Thompson remembers, “They may not have had in mind the therapeutic aspects of music performance, but the concert clearly raised spirits. The next year, students wanted to repeat the experience. Each time, the event became a little larger and more famous.”
And so, the Beatlemore Skidmania concert became an annual event, and one of the largest at Skidmore College. The concert became such a large production that it is no longer run by the Beatles Seminar (which Thompson continues to offer) but is instead headed by a group of students who work together in a group study.
These students audition performers, select the program, review poster and t-shirt designs from Communications Design students, market the concerts, and essentially organize the entire affair under the advice of Professor Thompson and many other professors, organizations, and departments at Skidmore.
Among the group of student organizers is senior Dave Slitzky who will also perform in this year’s concert with his band Bo Peep and the Funk Sheep. The eleven member band plays a blend of music Slitzy refers to as funk rock – a combination of many genres that results in “relatable and, most importantly, danceable” music.
This year, Bo Peep will open for Beatlemore Skidmania for the second year in a row. Opening for the concert in the famous Zankel Music Center doesn’t make David nervous. Instead, he says, “It’s an exciting opportunity to bring out so much energy right away in the show, and we’re more than happy to oblige.”
For a student band, playing for the large crowds attending the Beatlemore Skidmania concert is a rare opportunity. Slitzky said, “the true inspiration comes from the community organizations we serve by donating our profits from the shows…It’s pretty incredible that the music of The Beatles can unite a whole community, and that when together we rally to help those around us.”
See the highlights of last year’s Beatlemore Skidmania concert in the video below. You’ll hear from Professor Gordon Thompson and Skidmore students about the concert. Don’t miss Slitzky and Bo Peep and the Funk Sheep around the 4 minute mark!

This year’s concert is different in that Beatles fans and musicians will celebrate the 50th Anniversary of Beatlemania beginning in the U.K. Slitzky tells us, “the songs selected are all from the Beatles’ 1963 records Please Please Me and With the Beatles, plus the singles they released that year.” The most important part of the concert is that student bands don’t just perform the songs, they reinterpret Beatles classics. Slitzky remarks, “We’ve got some wildly original arrangements that sound fantastic.”

Each year, the concert ends in the faculty band and student performers joining together in the grand finale. This year, the group has selected “Twist and Shout,” a song that the Beatles did not write, but performed in their original way. Professor Thompson recalled that, “The Beatles were students too. They knew all of the music coming out of Detroit and Chicago, learned to copy Little Richard, the Isely Brothers, and many more American artists, and, in the process, transformed the music.”
Like the Beatles’ performance of the classic song, “Twist and Shout,” the student’s of Skidmore College will recycle, update, modify, and reinvent the Beatles Classics at their Beatlemore Skidmania concert. Thompson says, “The energy [the Beatles] put into their performances left audiences excited and exuberant.  We hope the same thing happens this year.“
The Beatlemore Skidmania Concert will take place Friday, November 22nd at 8pm with a matinee performance on Saturday, November 23rd at 2pm. A Skidmore-only finale concert will take place on Saturday evening. See the band line-up »
All of the performances take place in the Arthur Zankel Music Center on the Skidmore College Campus. Profits from the Beatlemore Skidmania concert and t-shirt sales benefit local charities.
To purchase tickets for the event online, visit the Arthur Zankel Music Center website or call the box office at 518-580-5321.
Keep up on what the Skidmore kids are doing by following the Saratoga.com blog and visit the Skidmore College events listings.
Beatlemore Skidmania 2013 poster design by Student Lea Carey