The Saratoga Convention and Tourism Bureau brings you Saratoga Chowderfest every February, but this year, they need your help to capture the Spirit of Chowderfest. That’s why they’ve brought us the 2014 Chowderfest Hat Contest!

Take a look at the Chowder Hat we crafted in the Saratoga.com offices! 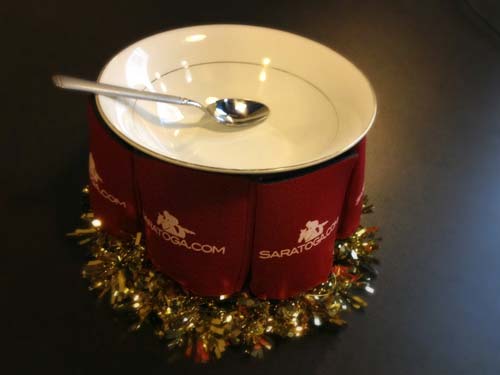 This Chowder Hat was hand-crafted by our editorial team (can you tell?). Designed with form and function in mind, this Chowder Hat is not too fancy, and not too utilitarian.

Says the creator of our Chowder Hat, “The Saratoga.com beer koozies will keep the chowder warm while giving the hat a casual, local feel.”

Chowder Hat model and Throwback Thursday Blogger Russ adds, “Plus, you can take it apart after the contest and use the koozies to keep your beer cold!” 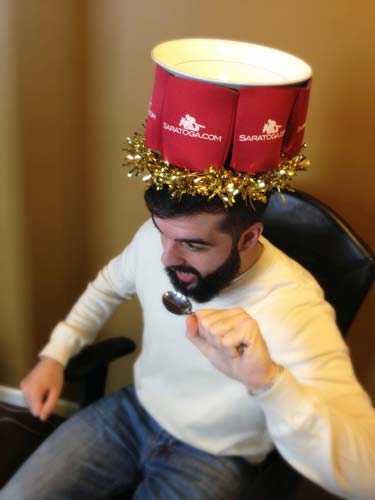 Kids and adults are invited to wear their Chowder themed hats to Saratoga Chowderfest while they enjoy soup samples and entertainment. Then, gather on Henry Street between 11:30 am to 12:30 pm to show off your Spirit of Chowderfest headgear.

Judging the hat contest is none other than Joyce Locke, owner of Hat sational by DEI, a store that specializes in fashionable accessories for all occasions. There are prizes for adults and kids with the best Spirit of Chowderfest hat!

Can you top our Chowder Hat? Get creative, go crazy, and make your best Chowder Hat possible!

See the date for this year’s Saratoga Chowderfest »