The snow is still here, when will it be summer? But not to fret, the Saratoga region has plenty of events this weekend, including the 2014 Chowderfest! It’s all here on What’s New Insider.

Winterfest kicked off with a chilli cook-off, pond hockey tournament and nights packed with live music last weekend, setting the scene for another great Winterfest outing this weekend – craft fair, wine tasting and 2014 Chowderfest! The Saratoga nightlife heats up as Chowderfest cools down. Plan to stick around and enjoy live music and drinks with friends while you digest all that chowder! 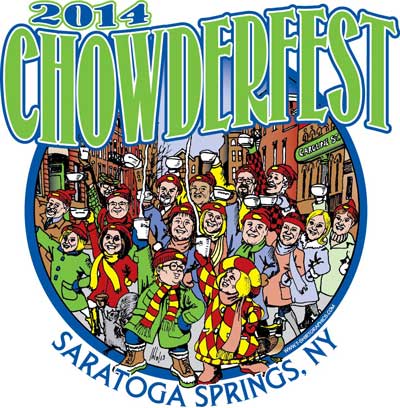 Winterfest events to look out for this weekend:

Check out all the live entertainment happening during Chowderfest>>

Bring the whole family for the CANdlelight Ski and Snowshoe fundraising event. Ski or snowshoe the one-mile candlelit loop for a romantic evening in the Saratoga Spa State Park. Admission is two canned food items which will be donated to the Franklin Community Center food pantry.

Due to popular demand, The Charles R. Wood Theater in Glens Falls has added a matinee of The Secret Garden. An enchanting classic of children’s literature, The Secret Garden is re-imagined in brilliant musical style by composer Lucy Simon and Marsha Norman, the Pulitzer Prize winning playwright of ‘Night Mother. The Secret Garden will also be presented on Friday, January 31 at 7:00PM and Saturday, February 1 at 7:30PM.

Check the What’s New blog for the best events in the Saratoga region. Hosting an event? Add it to our events calendar!