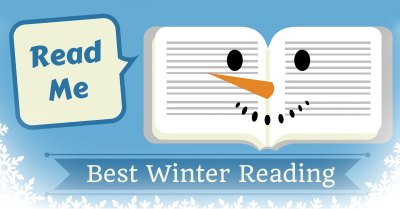 Yes, it will be 45 degrees out on Saturday (yippie!) but looking ahead, we’re going to get another set of icy days with temperatures dipping below the double digits. We don’t want to crush your hope for spring, but we do want to help you get through this last stretch of winter.

If you’re anything like us, you’ve probably exhausted Netflix, given up on The Walking Dead, and are considering returning to that old-fashioned hobby called reading – at least until March Madness starts.

Take advantage of the upcoming “warm” day and get these books before bundling up again for the last of winter.

Scott wrote this book partially at Yaddo and set it in rural New York State, making it a great addition to any hyper-local reader’s list. Scott keeps with the tradition of Cormac McCarthy and Michael Ondaatje by portraying rural, isolated characters as they set out to avenge a violent tragedy.

This one won’t have you singing of spring, but its dark intensity and vivid, lyrical writing will surely keep you fixated on the book rather than your Netflix queue.

Go Back In Time: The Bully Pulpit – Doris Kearns Goodwin

Another Yaddo artist, Goodwin is a bestselling author know recently for her book Team of Rivals: The Political Genius of Abraham Lincoln, which was adapted to the screenplay for the Oscar winning Spielberg Film Lincoln. Her latest non-fiction tale, The Bully Pulpit, insightfully tells the gripping story of the friendship between Theodore Roosevelt and William Howard Taft.
Named one of the best books of the year, The Bully Pulpit is a great choice for any House Of Cards fans looking for more political intrigue – only this time, it’s true.
International Escape: The Wind-Up Bird Chronicle – Haruki Murakami

While critics hail 1Q84 as Murakami’s opus, it’s a bit long for a late winter read. For something shorter but with the same impact, pick up the author’s 1997 novel. Translated from Japanese to English, the novel follows an unassuming unemployed man who loses his wife’s cat. What you find is a stunning tale of just how complex life and humanity can be.
Both comic and menacing, the novel is a modern classic melding the bizarre with the mundane. It will have you wondering just what’s going on in the placid places you thought were banal (ahem Saratoga in winter).
Comic Relief: One More Thing: Stories and Other Stories – B.J. Novak

This collection of stories is nothing short of entertaining and sensitive, much like the author’s hit TV show The Office. The stories are laugh-out-loud funny yet somehow down to earth. Novak’s key skill is understanding the human condition and the modern vernacular of conversations.
Great for anyone who can’t sit through a whole novel and wants a bit of a laugh, One More Thing will easily carry you to springtime.
You’ve Been Meaning To Read It: The Sun Also Rises – Earnest Hemingway

Maybe you missed the day in school where you were supposed to read this, or maybe you did read it and were left asking “huh?”. Either way, The Sun Also Rises is undoubtedly a tale to revisit. It’s a quintessential Hemingway story, told with his classic stark and clean diction, making it an easy, yet striking read. The novel follows expatriate narrator, Jake Barnes through his post-World War I travels in Spain and Paris.
If you liked The Great Gatsby, you’ll like The Sun Also Rises better. It’s an escape into a different time, place, and social structure – all accompanied by questionable morality and crushing desire.
If you missed Read In the Bathtub Day, check out Northshire’s suggestions – there’s nothing stopping you from filling up the tub to escape the winter cold! See the suggestions »
Do you have a last-of-winter book recommendation? Comment below with your top picks!
Heading out to get these books this weekend? Try Northshire Bookstore for a fresh copy, or duck into Lyrical Ballad for a well-loved used edition.