Beginning Thursday, April 30th, 2014, the two week Saratoga Springs Horse Show will celebrate its 55th consecutive show. Since 1960, the show has been the first outdoor USEF Premier (AA) Rating and USEF Jumper 4 Rating show in the Northeast. Last year, nearly 500 horses and riders of all ages arrived in Saratoga Springs to compete in this prestigious event.

For many horse lovers in the area, the horse show serves as a great pastime before the official racing season begins in late July. There’s the opportunity to see the incredible skill and beauty of the majestic horses, socialize with other horse lovers, and browse or purchase equine apparel, horse care products, and souvenirs.

Last year, the Saratoga 150 celebration helped to boost local tourism while reinforcing Saratoga’s reputation as the nation’s premiere horse sporting location. In 2014, many Saratoga organizations like the Saratoga Springs Horse Show hope to continue to spark the interest of locals and visitors alike. 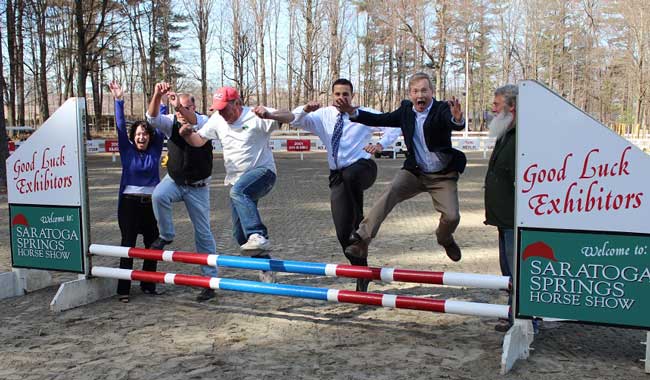 The Saratoga Springs Horse show is run almost entirely through the help of volunteers. In 2012, the show was passed down to the Capital Fund of Saratoga County from the St. Clement’s school. While the event changed hands, the mission to support county organizations that serve people in need has not changed.

Between causes like schools, the homeless, veterans, and more, the Capital Fund helps those in need right in Saratoga County. With the support of Congressmen Bill Owens and Paul Tonko, the Capital Fund and Saratoga Horse Show have distributed over $80,000 to local not-for-profit organizations. Saratoga County Camber of Commerce President Todd Shimkus notes that “this event has a more than $1 million economic impact locally.” With more than $1 million reaching our county and area nonprofits, it’s clear that the AA rated horse show is more than just a sporting event.

The Capital Fund has made many changes to the event over the last two years and welcomes suggestions and comments throughout the continued transition process. This year, the organizers hope to live web-cast all three rings so that the riders and spectators can watch the action remotely. In addition to the regular competitions, the Horse Show also offers fun activities including:

The Saratoga Springs Horse Show will take place April 30 through May 4 and May 7 through May 11, 2014 at the Yaddo show grounds, across from the Saratoga Race Track. Admission is only $4 for adults, and children under 12 are free.

For more information on the Saratoga Springs Horse Show or to volunteer visit their website here. We’ll see you there!