Why should heading to Splitsville have to be a drag? Imagine being greeted at the Gideon Putnam Resort & Spa with gift baskets filled with sparkling water, red wine, a voucher for spa treatments, among other treats. Sound like post-nuptial honeymoon glory at its finest? Think again! 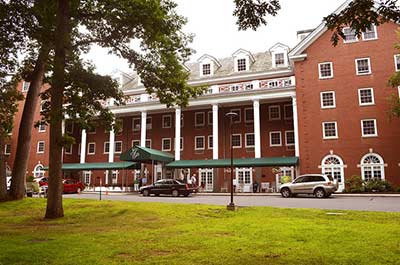 The Gideon Putnam Resort & Spa in Saratoga Springs is noted as a romantic setting that has played host to many swanky weddings and welcomed honeymooners from across the country. However, this past September, it began doubling as a “DivorceHotel.”

Check-in married. Check-out divorced. That is the concept of “DivorceHotel” which originated in Europe before making its way to the United States. Its aim is for couples to bypass the often time consuming, expensive and vulturous nature of divorce mediation. It currently boasts a 98% success rate.
The proceedings begin on Friday where couples pay a flat fee for the weekend. In between negotiating assets, the soon-to-be divorcées can relax at the luxe spa, enjoy gourmet brunches and take advantage of other resort amenities. The proceedings are then turned over to designated lawyers for each party, as well as a mediator, who draw up the divorce papers by check-out on Sunday. Talk about a quickie divorce!
Cathy and D. shared their experience with The New York Post and reported nothing but positives. They had been married for 26 years and were a great fit for the program. Both wanted an amicable split for the sake of their children and were willing to split their assets down the middle.
A key reason why things may go so smoothly is because some matters are taken care of ahead of the weekend. Retirement, custody and division of property are all discussed ahead of time with a designated mediator via phone and e-mail prior to arriving at The Gideon.
What do you think about one of the most romantic hotels in Saratoga doubling as a divorce destination? Let us know in the comments below!