Visit Saratoga.com For Everything Saratoga
Enter Giveaways Advertise
Home  »  Community  »  An Unsung Hero of the Battle of Saratoga Finally Recognized

Nearly 238 years later, an often overlooked hero of the Battle of Saratoga has become the subject of a new Revolutionary War biography. 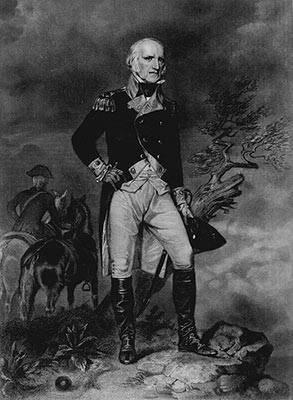 Brigadier General John Stark, a New Hampshire native, was responsible for the remarkable defense of a position near present-day Schuylerville called Stark’s Knob. He kept the British from withdrawing northward and also contributed greatly to General John Burgoyne’s surrender.

When Burgoyne was trying to backtrack North after the Second Battle of Saratoga, Stark’s New Hampshire militia arrive at Fort Edward and crossed over the Hudson River on the evening of October 12th, 1777. Richard Polhemus author of “The Life and Wars of John Stark, French & Indian War Ranger, Revolutionary War General” told the Troy Record, “Stark put the cork in that battle.”

And that’s only one of his many incredible feats. He also crossed the Delaware River with George Washington and played a crucial role at the Battle of Bunker Hill. Polhemus stated, “The more we learned about him, the more we admired and respected the things he had done.”

A fun fact you may not know, is that Stark is actually responsible for coining the phrase on the New Hampshire license plate, though he is rarely recognized for it. In 1809, when he couldn’t attend a celebration commemorating the Battle of Bennington, he RSVP’ed with a written toast that read, “Live Free or Die – death is not the worst of evils.”

Stark played a key role to the patriot cause, yet his name is not one we hear often. The main reason fame seemed to avoid Stark is because he never sought political office or high social positions.

Learn more about this very interesting, low-profile hero of the Battle of Saratoga in Richard and John Polhemus’ biography, “The Life and Wars of John Stark, French & Indian War Ranger, Revolutionary War General.” The book is filled with pictures and stories about the extraordinary life of Stark.