You may remember starting back in February when Mingle offered their “Attitude of Gratitude” promotion where 15% of breakfast, lunch and dinner proceeds were offered to a different local organization every Monday. This past Thursday, Mingle invited the 12 organization beneficiaries to take part in the “Giving Back Event” and the results were outstanding. 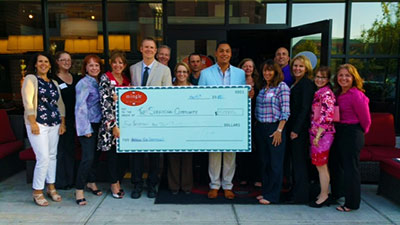 Jose Filomeno, owner and operator of Mingle on the Avenue in Saratoga Springs announced on Thursday night that a collective total of $5,000 was donated to individual community organizations through their promotion that ran from February through the beginning of May.

In regards to the fundraiser, Filomeno stated, “We initiated the Attitude of Gratitude campaign because I see it as all of our responsibility as citizens of Saratoga to help those in our community who need it. These community groups are truly the caretakers of our city and even though Mingle on the Avenue is new to the community, we wanted to contribute our share.” And, they most certainly did!
Businesses who participated in the promotion include Saratoga Bridges, Code Blue Saratoga, Saratoga County Economic Opportunity Council, Wellspring, Saratoga Central Catholic, Saratoga Hospital Foundation, Saratoga Arts, Catholic Charities of Saratoga, Shelters of Saratoga, The Community Hospice, Saratoga Senior Center, The Franklin Community Center and Warren and Washington Counties.
Bravo to Mingle on the Avenue from all of us at Saratoga.com, we speak on behalf of the Saratoga Springs community when we say we truly appreciate your efforts!