“Old, full of history, but still young at heart,” is how Saratoga is summed up in a story featured in National Geographic Traveler. The June/July issue is home to a nine-page spread on Saratoga Springs. The author, Andrew Nelson, provides a view of the city through rose colored glasses during Saratoga’s “perennial summertime explosion of animal spirits and high culture,” where he highlights the contrast between the old traditions the city stems from and how they have been adapted today. 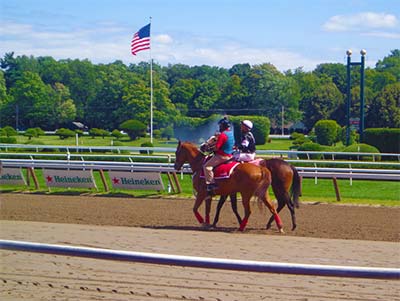 His story begins by summing up Saratoga in four words: Health. History. Horses. And lastly, tradition. Nelson talks about how his parents (now in their eighties) have followed the same busy summer social calendar for as long as he can remember. Just as his parents have adapted in their older years, the city of Saratoga Springs has, as well, he observed.
The “Disney World” of the 19th century and the number one tourist destination in the entire country in the 1870’s, Saratoga has remained one of the hot spot destinations for all ages and all backgrounds during the summer. The reason Nelson believes: the old traditions that are still carried on today and that are so accessible to partake in.
One example Nelson uses is the weekend of the Travers. To me, and most others my age, it is the epitome of glamour and exclusivity, but yet everyone and anyone can take part in it. A bit of a catch twenty-two, but that is the charm that draws so many to Saratoga and what Nelson captures in his article. Nelson’s younger, millennial-aged cousin chimed in his two cents in the article stating, “It’s being part of a tradition. You can’t replicate it. You have to experience it.”
While horses do go alongside money, Nelson notes that the crowd’s enthusiastic mood is far from what would be expected at other racetracks such as the Ascot. He states that it’s an “American racetrack in an American August and anyone can play.” He believes that may just be Saratoga’s secret to longevity and popularity. Nelson writes, “For all the snobbery that trails in money’s wake, Saratoga’s got a different view. Class, no matter what your background or wallet, is what counts here.” As a participant in many Saratoga summer seasons, I have to say I agree.
It is an honor to add such an expansive feature in National Geographic Traveler to our list of accolades and we hope you’ll pick up a copy and give it a read! Already read it? Give us your two cents on Nelson’s take on Saratoga!
Source:
National Geographic Traveler, June/July Issue