Going on eleven years, Capital Region Living Magazine has asked readers to give their input as to what businesses and events they feel are the Best in the Capital Region. And, for the third year in a row, the people have spoken… the Saratoga County Fair continues to be the perennial favorite, winning the best County Fair within the Magazine’s broader Culture category. 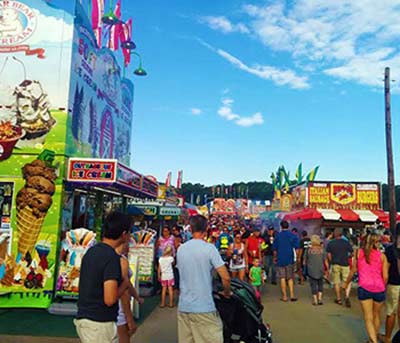 The Saratoga County fair has been a fixture in the community since 1841 and is held every July at the Saratoga County Fairgrounds and Expo Center in Ballston Spa.  With 30 acres of exhibit space that feature different buildings, pavilions and the historic 1895 grandstand, the Fairgrounds are a perfect spot for a fair or festival.

“Who doesn’t love a fair — the smells of food, shrieking kids on rides and good hometown fun? This is what Saratoga County Fair has delivered consistently for many years and earns them top spot for County Fairs this year!” Capital Region Living Magazine wrote in regards to Saratoga County’s win.
This year, the Saratoga County Fair will be held on July 21st through July 26th and will feature a variety competitions and displays, grandstand entertainment, horse shows, talent shows, Amusements of America Midway and of course, everyone’s favorite part… delicious fair food! New entertainers for this year include the Wolves of the Wild show and Gail Mirabal’s Dynamo Dogs, who has performed alongside the Ringling Brothers.
See what all the hype is about and make your plans to visit the Saratoga County Fair this summer!