Editor’s Note: We were originally informed that this event would take place on September 12 & 13, 2015, and were just recently notified that it has been tentatively re-scheduled for September 9 & 10, 2016. We have updated the article accordingly based on information from The Capital Fund of Saratoga County, Inc., operators of the Saratoga Horse Expo.

The Saratoga Horse Expo will tentatively be returning to Saratoga Race Course on September 9 & 10, 2016. The originally scheduled 2015 Expo has been re-scheduled for next year due to resource limitations. 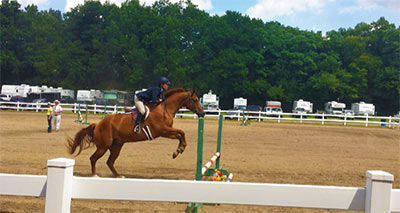 Each year, the Saratoga Horse Expo features a competitive equine-related event, seminars and demonstrations on equine-related topics, a variety of vendors and tack swap tables, games and children’s activities, food and beverage vendors, and various types of equine equipment on display. The 2016 Saratoga Horse Expo promises to have all of this, and be “the biggest and best ever,” according to a statement from the event organizers.

Like previous Expos, the 2016 installment will be used as a fundraising event to help select charities within Saratoga County that are helping others in need.

If you have questions about the rescheduling of the Saratoga Horse Expo, or the tentative 2016 event, contact Tom Fueston via email or by calling 518-490-1214.

We hope to see you at next year’s Saratoga Horse Expo!