At a crowded public hearing last week, many Saratoga residents, groups and racing enthusiasts gathered to voice their opinions on the planned developments at Saratoga Race Course, which are expected to total as much as $110 million over the course of a decade.

After brushing up on reports from various local news sources, including WNYT, News 10, Times Union and The Saratogian, it’s easy to see a pattern; as one speaker so eloquently put it, “The devil is in the details.”

While the speakers all had different concerns over these unprecedented developments, one prevailing theme rang clear: “Make necessary upgrades, but don’t spoil what we love most about the track.” 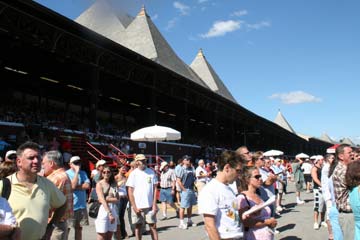 Being the oldest thoroughbred race track in North America, Saratoga Race Course is one of the most historical venues in the city. That historical charm is seen as something that needs to be preserved, protected, cherished.

Track patrons love the nostalgia of “stepping back in time” as they enter the track gates for an experience that has remained virtually unchanged for well over a century. Many are concerned these developments could alter that experience.

News 10 writes of the changes:

“NYRA has proposed updates to the grandstand and carousel. Also, new buildings and additions could go up throughout the grounds, including the “At the Rail Building” which would serve the most distinguished guests and would be a new site near the finish line.”

“Of the proposals, the At The Rail building is the most significant, adding a proposed 500 seats on the ground level, 12 suites with a capacity for 20 people on the second floor, and three to six suites with a capacity for 20 to 50 people on the top floor. Patios would provide views to the track, paddock and horse path, which would separate the new building from the Spa’s existing clubhouse.”

Of the 19+ proposed changes, the most offensive seem to be:

NYRA has also been criticized for neglecting to put enough focus on the horses, concerning their welfare and retirement, as most of the upgrades focus primarily on fan comforts.

Did you miss the public hearing but still want to weigh in with your opinion? The state will be taking written comments until June 15 – email Carolyn.dunderdale@ogs.ny.gov. WNYT notes: “Public comment will be included in an environmental review of the project, which needs final approval from the New York State Franchise Overview Board.”

You can also comment below to voice your thoughts or concerns publicly. What say you? Are you worried about the changes, or do you welcome change at the track?