What a weekend! The 2015 racing season in Saratoga kicked off in style with contests, new attractions and more. Couldn’t make it? No worries! We’ve rounded up highlights from this past Opening Weekend.

The 24th Annual Hat Contest was met with excitement, as always! Participants gathered at the track on Sunday afternoon to compete in the contest’s three categories: Uniquely Saratoga, Fashionably Saratoga and, for the younger patrons, Kreative Kids. After the fifth race of the day, Julie Potter was crowned the winner of Uniquely Saratoga, which recognizes whimsical and creative hats. The days most popular category, Fashionably Saratoga named Kim Nikolaus the most fashionable contestant of the day. Olivia Grove took home the crown as the most stylish youngster in the category of Kreative Kids. 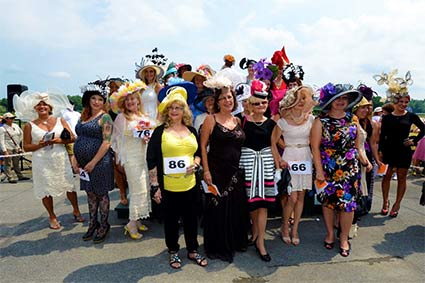 Photo Credit: Adam Coglianese of NYRA
Carousel Sports Bar Unveiled
NYRA announced this past weekend while unveiling the new sports bar in the lower Carousel that fans will have the opportunity to name it! Fans are invited to choose from a list of five legendary thoroughbreds: EasyGoer, FourStarDave, Kelso, Man O’ War and Sky Beauty. The thoroughbred which receives the most votes will have the new sports bar named in its honor. The contest ends on Friday, July 31st at 8:00 PM. Fans can place their votes online and are automatically entered to win a VIP hospitality package!
Fans Rally for American Pharaoh Appearance
Broadcasted live on ESPN’s SportsCenter on Saturday, racing fans gathered to call for an appearance by Triple Crown winner American Pharaoh at the Travers Stakes on August 29th. Organized by the Saratoga Chamber of Commerce  and attended by US Congressman Paul Tonko, New York State Assemblywoman Carrie Woerner and Saratoga Springs Mayor Joanne Yepsen, the rally was certainly a sight to see! One could hear chants of “We want Pharaoh” and “Pharaoh-Toga” could be heard before even seeing the large group. 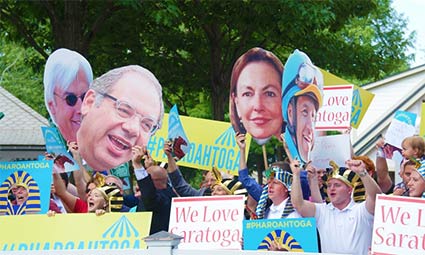 New Attraction: Walk of Fame
The all-new Saratoga Walk of Fame was also revealed this past weekend. The covered structure features the traditional Saratoga turrets and houses commemorative plaques honoring horse owners, trainers and jockeys who have made a mark on racing at Saratoga Race Course. The 2015 inductees are prominent owners Ogden Mills Phipps of Phipps Stable and Marylou Whitney of Marylou Whitney Stables. The plaques for each honoree will be unveiled during the annual Red Jacket Ceremony on Friday, August 28th.
Welcome the Tom Durkin Replay Center
Located within the newly renovated lower Carousel, the Tom Durkin Replay Center allows visitors the opportunity to view and hear 24 classic calls made by former NYRA Tom Durkin, who retired last summer after 24 years. Durkin stated in a press release, “This is one of the greatest thrills of my very lucky life in horse racing. To be literally attached to Saratoga Race Course is, well, incredible. 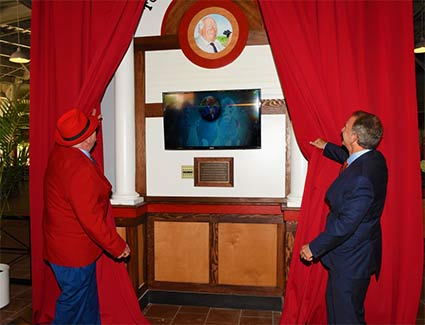 Big Winnings
A bettor won $471,124 on a .50 cent “Pick 5” ticket. According to ESPN’s Darren Rovell, the winning ticket had Realm, English Minister, Site Read, Hey Bro and Saratoga Mischief as the winners of the first five races on Saturday. While the ticket only cost .50 cents, the bettor paid almost $700 dollars on the “Pick 5” tickets! Therefore, when he left the betting window, he had handful of many possible winning tickets.
What a great weekend to kick-off the racing season! We hope to see you at the Saratoga Race Course over the next few weeks.
Source:
ESPN