Update: Steven won! He fooled Penn & Teller and will have the opportunity to open for their show in Las Vegas.

If you have ever walked along bustling Broadway on a warm spring or summer evening, more likely than not you have come across the wizardry that is Steven Brundage. You may know him as the guy who got out of a speeding ticket by enchanting the police officer with his famous Rubik’s Cube trick (Saratoga.com was treated to this magic trick a couple months ago when Brundage visited our office and I am still mind blown.)

Next week, on Monday, July 6th, Brundage’s sorcery will be televised nationwide, and you can watch! 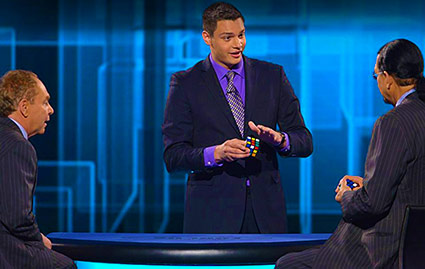 On July 6th, Brundage will be featured on “Penn and Teller’s FOOL US.” If you aren’t familiar with Penn & Teller, they are incredible illusionists and entertainers who have performed together since the 1970’s. During the show, magicians will perform their original tricks, and Penn and Teller will guess how they’re done. Any magician who stumps them will get to open up for their show in Las Vegas!

How cool is it that our neighborhood magician is taking the nation by storm? All of us at Saratoga.com will definitely tune in to the CW (channel 15) on Monday at 8:00 PM to catch Brundage perform and we hope you will too!