Saratoga Springs is already known for its vibrant performing arts scene, but a recently announced partnership seeks to expand it even more. Universal Preservation Hall, a former church that has hosted a variety of events since the early 2000’s, is teaming up with one of the Capital Region’s most prominent venues, and this partnership will certainly be beneficial for all parties. 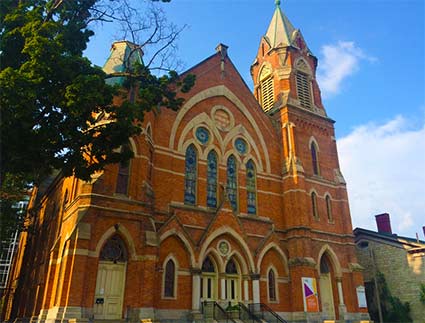 UPH’s new partner is Proctors of Schenectady, which has already seen success in a separate alliance with Albany’s Capital Repertory Theater. The new team is seeking to raise a total of $4.3 million to completely renovate the 25 Washington Street space, including installing new sound and lighting systems, an elevator, heating, air-conditioning, and a sprinkler system, the Albany Business Review reports. The venue will be closed for the entire 2016 season, and is expected to re-open in 2017.

In its current condition, Universal Preservation Hall is a fitting space for some types of events, but not all. Once the renovations are complete, it will be an ideal location for weddings and receptions, theatrical and dance performances, films, art galleries, and a plethora of other functions.
The Saratogian quoted UPH president Teddy Foster as saying that he hopes the renovations will convert the space into “the cultural center for all of Saratoga, right in downtown.” This is a massive step forward for a venue that was once destined for destruction. A parking lot was planned for the place where the old church stood, until a community group decided they couldn’t let that happen. $3 million was spent on initial renovations in 2004 to get the building in working order, but even with the initial efforts, more work still needs to be done.
The strategic alliance was three years in the making, and will result in Proctors taking over UPH’s booking, operations, marketing, ticketing, and finances, according to The Times Union. The partnership will help to jump start UPH’s much-needed renovations, and more than 200 events are projected to take place during the venue’s first post-construction season.
Source: