Having been a frequent visitor and now, a recent resident to Spa City, I truly believe there is nothing more that could be added to make Saratoga even more wonderful than it already is. However, the latest addition may just prove me wrong. A waterfront park on Saratoga Lake that has been in the works for some time now has set its opening date for July 9th.

Back in 2006, the Waterfront Park Committee held a meeting to discuss the four-acre parcel of land off Crescent Avenue of Saratoga Lake which has been developed into Waterfront Park. Since then, this project has been working towards creating a beautiful public space right on Saratoga Lake.

The park will allow for picnicking, kayaking and even small events! The lower terrace of the parcel was transformed into a sandy beach. Above the beach on the middle tier is a small amphitheater that will allow for community gatherings and events to take place overlooking Saratoga Lake. On the top tier, you can find the parking lot and a staircase that leads to both the amphitheater and beach area. There are no current plans for swimming at the new beachfront as of yet. 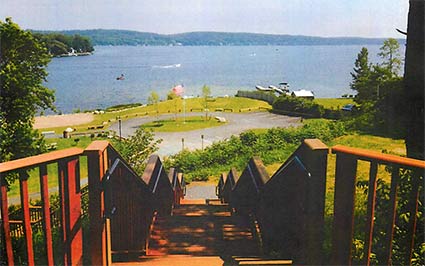 To get to the park, head east on Union Avenue and take a right on Crescent Avenue, just after Interlake. The park is approximately a half mile down on the left. A tour of the newly refurbished park will immediately follow the event. We hope to see you there!

What do you think about this new addition to Saratoga Springs?