Happy Travers Week, Saratoga! By now I’m sure you’ve heard the buzz that American Pharoah will be joining us in Spa City for the most anticipated weekend of the year. In addition to the Triple Crown winner’s appearance at the track, there are several other exciting events happening this week, as well! Take a look: 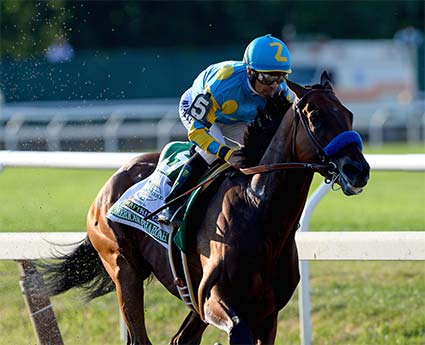 Stewart’s Shops Day
The highlight of Stewart’s Shops Day will be the annual Stewart’s Ice Cream Eating Contest, during which three age groups of kids (ages 6 to 12), teens (ages 13 to 17) and adults (ages 18 and up) will compete to finish a pint of ice cream in the shortest amount of time. The winner in each category will receive gift certificates. The competition will take place after the day’s third race at around 2:10 PM. The day will also feature a number of family-friendly activities at the Saratoga Pavilion, including a farm-themed bounce inflatable, photo opportunities with a milk truck, music, face painting and free Stewart’s Shops ice cream samples while supplies last.

Saratoga Season Pass and Season Ticket Holder Appreciation Day
All Saratoga season pass and season-long reserved seat ticket holders will receive a 15% discount at the NYRA Store each Wednesday of the meet.

New York Turf Writers Cup
The day’s feature race is the Grade 1, $150,000 New York Turf Writers Cup, a steeplechase race for 4-year-olds and up.
A Visit from Funny Cide
NYRA will welcome the return of Kentucky Derby, Preakness and Jockey Club Gold Cup champion Funny Cide to the track. Fans are invited to watch the 2003 Eclipse Award 3-year-old male champion parade in the paddock from 11:45 AM to 12:30 PM.

Saratoga WarHorse, a non-profit program for military veterans, will be at the Outreach booth. The program has been effective and invaluable for those struggling to return to their normal life after service. It is provided free of charge and gives veterans the opportunity to interact with retired thoroughbred racehorses during a three-day experience. Fans will receive a commemorative Funny Cide poster, courtesy of Sackatoga Stable, in return for a minimum suggested donation to the organization.

Taste NY: Cider, Wine & Spirits
Track patrons will have the opportunity to try a variety of different wines, ciders and spirits from New York State distilleries and wineries. The tasting will be held in the Saratoga Pavilion from noon to 5:00 PM.
Saratoga Season Pass and Season Ticket Holder Appreciation Day
All Saratoga season pass and season-long reserved seat ticket holders will receive a 10% discount at Shake Shack each Thursday of the meet.
Travers Celebration
The Travers Celebration, the official party of the Travers, will be held in support of the Backstretch Employee Service Team, Saratoga WarHorse and the Times Union Hope Fund at Saratoga National Golf Course at 7:00 PM. This year’s event will honor owner Magalen O. Bryant, trainer Jimmy Jerkens and jockey Javier Castellano, the connections of 2014 Travers winner V.E. Day. Tickets are available for $375 per person.
At the Post Live: Serling on Saratoga
NYRA broadcast analyst and nationally recognized racing personality Andy Serling will host the sixth in a series of weekly live broadcasts on ESPN Radio 104.5 “The Team” at The Parting Glass at 8:00 PM. Serling will offer weekly racing tips, discuss behind the scenes information about Saratoga Race Course and interact with special guests including famous trainers and jockeys, racing personalities, notable industry figures and celebrity horse racing fans. The weekly broadcasts are free and open to the public. 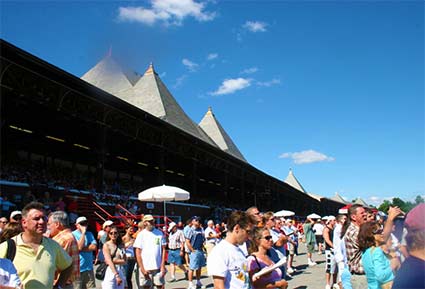 2015 Triple Crown champion American Pharoah is expected to workout on the main track at Saratoga Race Course between 8:45 and 9:00 AM. in preparation for the Travers Stakes. The public is invited to watch during the traditional breakfast at Saratoga, with gates opening at 7:00 AM. There is no charge for admission and parking refunds will be issued for all those who depart Saratoga prior to 10:00 AM. Breakfast ($17.95 for adults, $9.95 for children 3-12) on the lower porch will be served on a first-come, first-served basis. Backstretch tram tours will not be available on Friday, August 28.

Travers Eve will be dedicated to New York-breds during New York Showcase Day at Saratoga Race Course. The popular state-bred card will include six stakes. The West Point Glee Club will also perform the day’s national anthem at the winner’s circle at 11:30 AM.

Track goers will be able to try a number of different craft beers from New York State breweries from noon to 5:00 PM in the Saratoga Pavilion.

Triple Crown winner American Pharoah will race in front of a sold out crowd of 50,000 fans during the 146th running of the Grade 1 Travers at the track. All Travers Day tickets are sold out. Gates open at 7:00 AM. for ticketed patrons on Travers Day with a special first post time of 11:45 AM. The Travers will go to post at 5:46 PM. and will be broadcast on NBC as part of a two-hour live broadcast beginning at 4:00 PM.

The Travers Day card features the addition of three Grade 1 stakes to make up a blockbuster lineup of six Grade 1 races and a Grade 2 for a total worth of nearly $5.5 million on the afternoon (the purse for the Travers will go up to $1.6 million from $1.25 million if expected starter American Pharoah runs.)

Please keep in mind that Travers Day has sold out. Racing fans are advised not to travel to Saratoga Race Course on August 29 without tickets in hand. Clubhouse and grandstand season passes are valid and will be accepted on Travers Day. The paid attendance cap takes into account all patrons who have made dining and table reservations on Travers Day for the following on-track locations: the Turf Terrace, Club Terrace or Lower Porch; the Fourstardave sports bar in the lower Carousel; and the reserved picnic table section in the backyard.

The Fourstardave Sports Bar and The Post will have live entertainment until 9:00 PM on Saturday.

Ticketed patrons who are planning to attend on Saturday can view a full list of prohibited items on NYRA’s website.

Dress to impress on Travers Day! Prizes for the best dressed man and woman will be presented on Saturday afternoon. Local spas and retailers will also be highlighted as part of Fashion Saturdays at the track.

The NYRA Community Outreach Booth will feature two non-profit organizations that dedicate their efforts to serving backstretch workers on New York tracks. The booth will feature representatives from the Backstretch Employee Service Team and Racetrack Chaplaincy of America. 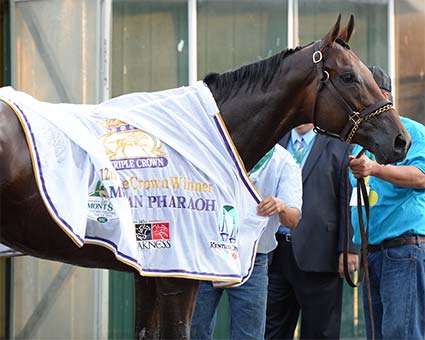 Track visitors can sample food and shop for artisanal crafts made exclusively in New York on Sunday from 10:30 AM. to 5:00 PM. at the Saratoga Pavilion.

The NYRA Community Outreach Booth will host The Giving Circle. This volunteer-based organization in Saratoga Springs carries a mission to connect those in need with those who can help them. The Giving Circle works directly with communities locally, nationally and internationally to repair and rebuild homes, teach life skills and more.

Families will have the opportunity to participate in a wide array of games, attractions and educational activities as part of Berkshire Bank Family Mondays. In addition to family friendly festivities, each week, an organization is able to fundraise. This week’s featured organization is Saratoga Academy.

NYRA would like to thank its fans with a series of special events and offers during closing week of the 2015 racing season. Beginning Monday, August 31 through Labor Day, Saratoga season pass and season-long reserved ticket holders will receive a 25% discount at the NYRA stores; as well as a 15% discount at select concession stands.