It’s hard to believe that the 2015 season at Saratoga Race Course has already come and gone. During what was an undoubtedly successful 40 days, NYRA hosted a total of 40 local non-profit organizations during the meet. 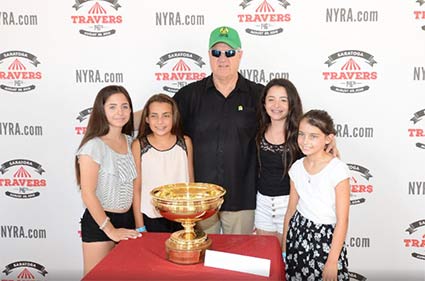 Most of the non-profit organizations were hosted in the Community Outreach Booth. There, each organization was given the opportunity to interact with the thousands of guests who visit the track daily through fundraising initiatives.  Additionally, each organization was highlighted on the video boards throughout the day, as well as included in the day’s Post Parade program with a full-page profile.

In addition to hosting organizations at the Community Outreach Booth, NYRA worked with participating non-profits to create innovative fundraising initiatives throughout the season, including photo ops with various championship trophies and autograph sessions with industry stars. NYRA also provided complimentary merchandise to the non-profits to give to fans in return for a suggested donation.
“The New York Racing Association was honored to welcome dozens of non-profits to Saratoga Race Course this summer, where they had the opportunity to fundraise for their cause and engage daily with thousands of fans. With the equivalent of only one non-profit represented each day, Saratoga Race Course offered a unique setting for these organizations to raise awareness and funds on an almost exclusive daily basis,” stated NYRA CEO and President Chris Kay in a press release. He continued, “We recognize how important these non-profits are to those they serve and are pleased to assist them in achieving their goal of creating a stronger community.“
One of the most memorable Community Outreach events of the season was on August 10th, when hundreds of fans lined up to have their picture taken with the Stanley Cup. The photo opportunity benefited the Lake Luzerne based Double H Ranch.

Saratoga Springs-based men’s singing group Racing City Chorus employed one of the more creative approaches at the Booth. They performed barbershop style songs for track guests in return for donations as part of the Saratoga Centennial Day celebration on Wednesday, August 5.

“What a fabulous day, we had a great day,” said Jerry Crouth, stated in a press release, “It was very successful from a fundraising standpoint, but even more so from the amount of publicity that we got for our organization.” 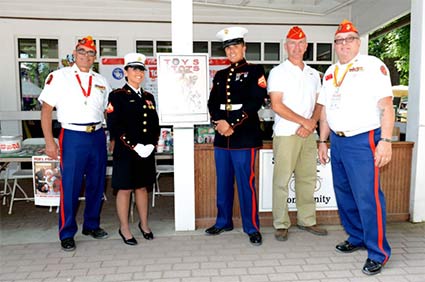 In conjunction with the 88th running of the Whitney on Saturday, August 8, NYRA welcomed the Capital Region chapter of the U.S. Marine Corps Reserve Toys for Tots Foundation to the Community Outreach Booth. U.S. Marines collected toys and hundreds of dollars in donations for its upcoming annual holiday toy drive. They returned to continue their fundraising efforts as part of Military Appreciation Day on Wednesday, September 2.

Trainer Todd Pletcher and jockey Javier Castellano made a special appearance at on Saturday, August 16 in support of the St. Baldrick’s Foundation.

Jockey Kendrick Carmouche, the first African-American to ride regularly at Saratoga in recent memory, also greeted fans and signed autographs at the Community Outreach Booth with a donation to Saratoga Springs-based organization Dyer-Phelps on Wednesday, August 19.

Following the 146th running of the Travers, racing fans were invited to have their photo taken with the official trophy of the Mid-Summer Derby, the Man O’ War Cup, with a donation to the Capital District YMCA on Monday, August 31. Jerry Crawford, founder and president of Donegal Racing, the ownership group of 2015 Travers winner Keen Ice, greeted fans at the Community Outreach Booth throughout the afternoon.

On Friday, September 4, five thoroughbred aftercare charities appeared at the Community Outreach Booth as part of their ongoing partnership for the sixth annual Run for the Horses 5K. Each of the organizations which benefit from the road race had representatives at the track, including ACCT Naturally, Heading for Home, Old Friends at Cabin Creek, ReRun, Inc., and the Thoroughbred Retirement Foundation.

Congratulations to all the non-profits and volunteers who successfully raised funds and awareness for their causes. We hope 2016 will bring even more fundraising opportunities!