If you’ve been to the track, SPAC, Skidmore or either of the Co-ops in Albany or Niskayuna, you may have noticed Saratoga Juice Bar products on their shelves. This surging increase in the juice’s popularity has caused the owner’s to sell one of their other business ventures. 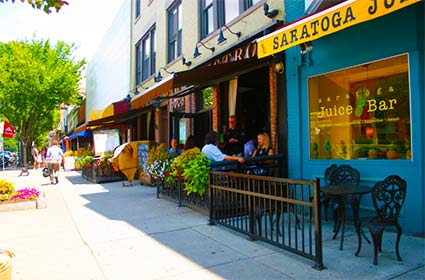 Colin and Christel MacLean, who own Saratoga Juice Bar, The Crown Grill and The Circus Cafe, have seen the huge growth of their juice bar’s popularity in the past two years. The reception of their five pounds of fresh produce in a bottle juice has been so incredible, that the couple feels their focus should be narrowed.

As the MacLeans look to take their juices to a national market, the couple plans to sell The Crown Grill. However, this isn’t an ordinary business sale! There will be a donation $10,000 of the proceeds from the sale to a local charity of the new owner’s choice.

The Crown Grill seats 130 guests and the listing price is currently at $595,000. The best part? The MacLeans stated in a press release, “We’ll still be right next-door at the Circus Café — and always happy to help a new owner.”
Best of luck to the MacLeans on carrying their businesses forward!