Ed Lewi, founder of Ed Lewi Associates and a trailblazer in the public relations industry, passed away on Saturday at the age of 81. He will forever be remembered for the impact he had on Saratoga and the Capital Region through his work in public relations, and also for his philanthropy and dedication to the community. 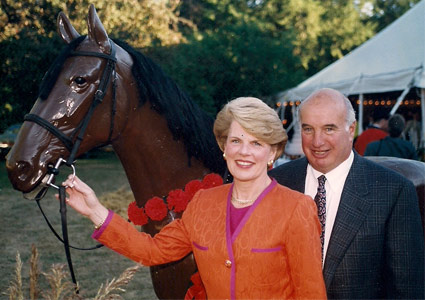 Lewi’s agency went on to secure the public relations contract for the 1980 Olympics in Lake Placid, the United States Figure Skating Association, and became the New York Racing Association’s public relations agency in the late 1970s.
In a statement, Ed Lewi Associates said, “Upon becoming the public relations agency for NYRA, Lewi and his agency secured national and international media coverage for Saratoga Race Course through his longtime friendship and association with Marylou Whitney, who together helped brand Saratoga as ‘the summer place to be.'”
“He helped put Saratoga on the map,” Whitney said in the statement. “Saratoga is the place it is today because of Ed Lewi.”
Throughout his career, Lewi placed an emphasis on community involvement, donating time and money to the Double H Ranch, Saratoga Performing Arts Center, Camp Chingachgook, the Capital District YMCA, and other causes.
“Ed’s outsized impact on the biggest attractions in the Capital Region, from Saratoga Race Course to the Saratoga Performing Arts Center, and his dedication to life altering non-profit organizations such as the Double H Ranch, will be felt for decades to come,” Ed Lewi Associates President Mark Bardack said in a statement. “Ed had an innate ability to warmly connect with people on multiple levels and made everyone with whom he came in contact feel special.”
The New York Racing Association has named the seventh race on Sunday, September 6 in honor of Lewi.
From everyone at Saratoga.com, our condolences go out to Lewi’s family, friends, and business associates. Lewi’s significant contributions undoubtedly made our region what it is today, and his presence will be perpetuated through the people and organizations that he touched.