NYRA paid tribute to the country’s service members and veterans during Military Appreciation Day at the Saratoga Race Course. 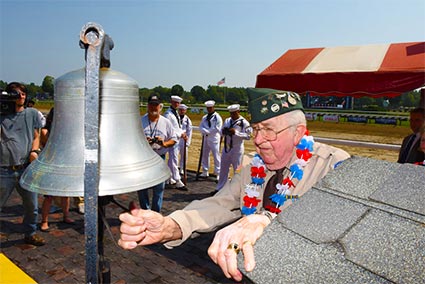 “NYRA is honored to recognize the service and sacrifice of the men and women of the United States military. We were thrilled to host our service members and veterans, including those from the ‘Greatest Generation,’ with a day dedicated in their honor,” NYRA CEO and President, Chris Kay, stated in a press release.
NYRA paid tribute to its service member and veteran employees with a special ceremony in the winner’s circle during the National Anthem, which was performed by Master Sergeant Mary Kay Messenger of the West Point United States Military Academy. The singing of the National Anthem was accompanied by a Presentation of Colors from members of the Naval Support Activity Saratoga. Master Sergeant Messenger also sang God Bless America after the third race of the day.
World War II veteran, Gene Gierka, of Schenectady, who served in the U.S. Air Force, rang the bell in the winner’s circle seven times at 17 minutes to post time before the day’s second race to commemorate the 70th anniversary of VJ Day.
“It’s unbelievable,” stated Gierka of his time at the track on Military Appreciation Day. “I often said that for 50 years we were forgotten, but that for the last 20 years there’s been so much credit given to the Greatest Generation. I’m glad I’m here.”
Artwork by veterans who have participated in the fine arts program of the Veterans Services Project at Living Resources was on display in the Saratoga Pavilion. The program provides veterans who have been diagnosed with PTSD with an outlet to express their emotions as they transition back to their civilian life.
The Community Outreach Booth hosted the Toys for Tots Foundation, a national movement organized by the U.S. Marine Corps Reserve to collect new, unwrapped toys to give to the less fortunate children in the area. Various other military organizations offered interactive displays at the Saratoga Pavilion including the New York National Air Guard, New York State Military Museum, Leatherstocking Honor Flight; Patriot riders and the Jewish War Veterans Post 36-Saratoga.